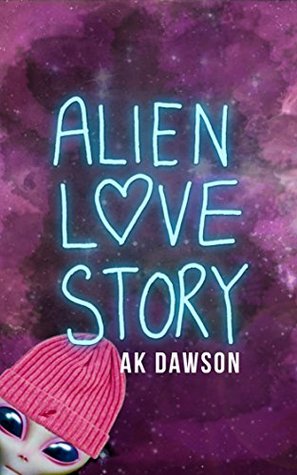 Life is a headache for 15-year-old Dan. This isn’t some kind of metaphor. Dan suffers from migraines that make just about everything he does unbearable. Added to that he’s lost almost everyone he cares about. So he feels lonelier than the last puppy in a pet shop.

But one day he sees a mysterious girl digging in the rubbish bins behind his house. Just by being near her, he finds that all his pain goes away. So he wants to see her again, of course. And get to know her. But she’s a bit strange. And her big eyes make her look, well, like an alien.

Does she really exist? Or is she just a figment of an overactive, under-loved imagination?

I received this book from the author in exchange for an honest review.

I want to start of with the fact that I was expecting this book to be for a younger audience based on the cheesy title and the childish cover, however once I started reading it, I realised that it is certainly intended for a teen audience primarily due to the large amount of sexual references (non graphic). I have to admit that I found this rather refreshing, as many authors try to downplay the heightened hormones of teenagers, however I think that it was a useful tool in creating the confused and traumatized character of Dan.

I thought that the romance was out of the blue, and not really all that romantic but simply awkward which is why it took me a while to get through this book because I just couldn’t connect with the characters as their relationship was so unnatural, but then again we are talking about a human and an alien so perhaps that is too be expected.

I must say that I thoroughly enjoyed the first half of the book and found it amusing and entertaining, however the second half was a tad confusing and it seemed like this novel has a lot of potential to be excellent but that it has just been a little rushed. I adored the secondary characters of Gran and Tony and thought they added a sense of reality to the story.

Of Course this book also deals with the topic matter of death and as an audience we feel sorry for Dan, however I think that the theme of loss could have been explored in more detail however I did enjoy the fact that as an audience we were forced to question Dan’s sanity. Overall, this was a quick and entertaining read.