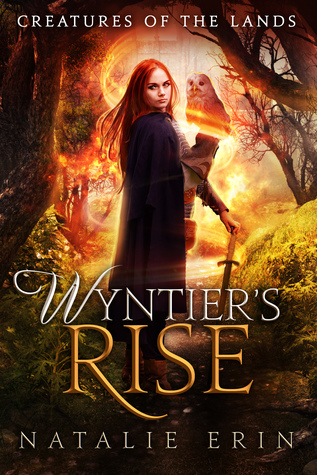 It has been over a decade since Wyntier kidnapped Kennu and his friends. Nearly sixteen, Kennu and his griffin Allie live within the safety of the Verinian Forest, guarded by dragons and unicorns at all times. Desperate for freedom, Kennu and Allie attempt to be normal teenagers while Allie deals with the repercussions of her powers as a prophetess, and Kennu an ever worsening, terminal illness. Yet Wynter is on the move, and he will stop at nothing to obtain power, targeting the only ones who stand in his way…Kennu’s family.

Meanwhile, across the ocean, Kennu’s cousin Soran deals with a string of strange disappearances. The once-democratic government in the city of Nesting’s Haven has transformed into a dictatorship, his university changed from a school of magic into a brainwashing facility.

No one who stands against the new regime is allowed to live. Teenagers build new friendships, battle bullies and fall in love as the world collapses around them into an all-out war. But how can a bunch of kids stop the most ruthless villain the Lands have ever known? Is it really worth losing everything to stand up for what you believe?

A story of grief, hope, and faith, Wyntier’s Rise is a young adult epic fantasy full of witches, vampires, shifters, and fae. Readers will stay up all night to complete Natalie Erin’s newest edition to the Creatures of the Lands series.

**Disclaimer: I received this ARC from the author/publisher in exchange for an honest review**

This is the third book of the Creatures of the Land series and I must say that even though this series started poorly, it seems to be getting better with each book. This book has more character development and I feel like I can finally start relating to the characters… and telling them apart.

I was relieved that there wasn’t an abundance of new characters introduced and that the ones that were didn’t play huge roles, except Angel. All of the awkward and choppy plot lines of the individual characters are starting to make sense as the authors have stopped chucking information at their readers and started writing a story of how they all intertwine in each others lives.

The romances seem less rushed and awkward. Ionan seems to be moving on from Vera but slowly, which is nice since she deserves a high level of respect. Ionan happens to be my favourite character from the very first book, whereas all of the other annoyed me. The constant family drama in this book was strange and felt out of tune at times. On the other hand I never liked Kia and Keota so I didn’t care at all about what happened to them.

I enjoyed this book because it was fast paced and entertaining. It focused on the new generation, which meant new characters. The authors writing has gotten a little bit better with each book, so the new chracters had real personalities that actually made me want to care about what happened to them.

Lastly, I think that the title doesn’t quite fit the book, since 75% of it was about the family drama and how all of their friends got involved. Wyntier’s rise to power occurred within 10 pages at the end. Overall it was a good book and I look forward to reading the next 3 books in the series.